I seem to be reading a lot of Gray Friar Press lately, and there’s a reason why I keep going back. Enemies at the Door is no exception to the quality; a collection of short stories and novellas by the equally reliable Paul Finch. I associate this author with a sharp understanding of the human condition and engaging prose, so having read promises of baleful presences and murderous brutes, I couldn’t wait to get stuck in. 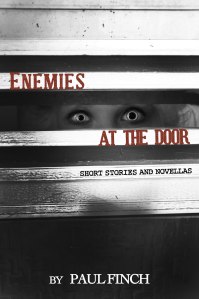 And so the fun begins with one of the best opening lines to a collection ever. “When” introduces a priest attempting to correct an errant boy at a traditional grammar school, and its brave opening gambit heralds a wry short in which the discussion between holy man and tearaway turns chilly very quickly. It’s a strong start to the book and the finale made me do a double-take. In a good way, of course.

Next up, “Slayground” presents something of a wall of text, ultra-light on dialogue as it is, which can be a wince-inducing sight. But within a page I was gripped. Our hero is a rookie armed response copper thrown in at the deep end with a scene of unfolding carnage in the centre of London. This author excels at violent action, which is what “Slayground” is all about. It may not be for all, but I loved the escalation of terror, making us realise how helpless we might be in the event of such an attack. The sense of unstoppable menace is superb, and many writers would struggle to maintain interest with such a one-track whirlwind, but I was swept along to a conclusion that makes me smile to think about it now.

“Those They Left Behind” begins with a lighter tone. We meet Elsie, an elderly widow missing her son, but the mood soon turn dark when she purchases a hangman’s dummy from an esoteric  market stall and we start to learn about her past. Reflecting gently upon themes such as care of the elderly and capital punishment, this is a solid piece.

A dose of the cold supernatural follows with “We Who Live in the Wood”. It introduces David, who ill-advisedly rents a remote cottage on Dartmoor for his wife Sonja’s convalescence, but she soon becomes obsessed with a local legend surrounding an adder-infested wood. Although many of this story’s elements seem familiar, it’s saved by strong characters and jack-knifes out of predictable territory for a bleak finale.

It’s almost Christmas in “The Faerie”, and we meet Arthur, a divorcee absconding with his daughter across the Peak District on a wintry night. Naturally, the weather and darkness conspire to render them lost, and they stumble across a very strange sanctuary. Although beautifully evoked, this story didn’t reward the intrigue for me, but it’s still a decent dark fairytale for the festive season.

Despite the jolly title, “Daddy was a Space Alien” brings a grim change of tone, narrated by a gutter press journalist who arranges a photo shoot of disfigured people for a lurid article. It’s a reflective piece with seamless voice, but don’t read it if your mood is low; it harbours a quietly depressing vibe.

“The Doom” is the only tale in this collection that I’d read before, and also my favourite. Here we meet Reverend Bilks, a young priest with a pretty wife and a rural church that boasts a tourist attraction: an ancient piece of hellish art depicting the 7 deadly sins. But when a sinister stranger arrives to discuss moral and criminal responsibility, he realises he’s out of his depth. “The Doom” brings a contemporary voice to a traditional Wheatley-esque setting, and presents intelligent themes of sin, moral choice and consequence. But it’s the helpless, shattering payoff that makes it so memorable. Even though I knew what was coming this time, it still disturbed me. Perhaps deep down I was hoping that the author might have since revised it into something less devastating. Fortunately, he hadn’t. Brilliant, horrible stuff.

One of the longer tales, “Blessed Katie” introduces Madeleine, a woman moving into her old childhood home with her husband and baby. But soon it seems as though she’s being beset by a ghost from her past: a crazy Victorian apparition whom she thought was a creation of her imaginative brother. Using his talent for swift character investment, the author cracks on with the plot, and we’re treated to some beautifully nightmarish set pieces and a faultless Rosemary’s Baby feeling of helplessness despite the crowds. I was expecting the conclusion to be more gleefully dark than it was, perhaps in the vein of “Slayground” or “The Doom”, but what initially presents as a standard ghost story still has plenty of tricks up its sleeve.

“It was to Chockton’s advantage that he looked so innocent.”

Thus opens “Elderly Lady, Lives Alone”, which gives a grim clue as to what’s coming. A sour-tasting short about a granny-bashing thief who scours the deprived areas of town for the vulnerable, this story has its roots firmly in the old school. With the unusual angle of a protagonist who’s a bastard, it still manages to be nasty fun.

More urban squalor follows in “The Ditch”. It begins with Nicolette, an unfortunate sex worker and ex-addict, being picked up by a couple of local hardcases. In pleasing Finch style, she’s soon in a subterranean chase to avoid a ghastly execution, one with extraordinary historical overtones. This tale just keeps piling on the darkness and adrenaline, and also contains a moment so expertly crafted that it made me physically jump and my stomach lift with the sensation of falling. Only once before have I ever had such a reaction to the written word, and that was while reading Stephen King.

“The Poppet” tells of a couple of old student friends meeting in a quaint village in the Lake District. The story concerns a jealous love triangle and a shop that sells poppets: strange wooden dolls attached to a lesser-known myth of local witches. The author begins with spooky menace then slowly cranks it up into breathless pursuit – two areas of style in which he succeeds mightily – and rounds it off with another wicked and pleasingly neat conclusion.

Finally, “Enemies at the Door” features a retired soldier, shrapnel-damaged and paranoid in imaginative ways that I wouldn’t dream of spoiling. The tale delivers a convincing relationship with his partner, despite them commanding very little page time, and I liked the seamless tense shifts for passages of recollection. An intriguing climax, it leaves things appropriately open.

Enemies at the Door is a quality collection. A modern horror tour of this green and pleasant land, it effortlessly transports us to scenes of urban deprivation, the beautiful but unforgiving countryside, and every nook in between.

Paul Finch is a master of the male and female voice, and the dialogue is real, delivered by characters we feel. They’re generally struggling, whether against their own fears, moral issues or an internal crisis of some kind, which ensures plenty of heart and substance.

The author also has the knack for a magnetic opening line. The prose is crisp and addictive whether presenting atmosphere, the mundane, or explosive action, and the details paint detailed vistas to which the succinct wordage has no right. The only fault that springs to mind is the genre tropes and moments of familiarity to be found, but even then, the storytelling is never less than muscular. And if you love a good finale, there’s several award-winners in this book.

I used to believe in ghosts. I don’t anymore, and part of me misses what it was like: that chill of unknown malevolence that sharpens the senses. Well, Paul Finch’s supernatural stories take me right back to that place. And as for his human monsters, there’s no hiding from them on any level.

One thought on “Review: “Enemies at the Door” by Paul Finch”