It was a chilled but sunny December morning when I opened a parcel to discover this beautiful jacketless hardcover from Screaming Dreams. 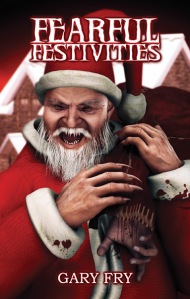 I tend to dislike jackets anyway – they just snag and look tatty – and even after being read, dropped on the floor and pounced on by the cat, this sturdy book still looks pristine, festooned with its fantastic artwork from Steve Upham. And it turned out to be a great distraction from the pre-Christmas chores that I should’ve been doing. Having enjoyed several of Gary Fry’s short stories, I was pleased to discover that Fearful Festivities is a thoughtful and well paced horror novel, brimming with the season of ill-will.

It begins on a strangely warm December 22nd in the gentle Yorkshire village of Hitherton, when several of the residents receive a dragon-stamped invitation in the mail.

“Christmas is a time for miracles. Tell us what you want.”

Delivered by an elusive but nightmarish postman, could these tempting requests possibly be the answer to their woes? There’s Tom, a cash-strapped family man with a failing bookshop, and Graham, his unemployed academic brother. We also meet a lonely and obese woman, a wannabe internet tycoon, and a boy who misses his soldier father who’s away fighting in Afghanistan… and all of them have a deep longing for something that traditional gifts can’t provide.

Along with some other desperate folk, they’re lured into making wishes against their rational judgement. The miracles start to take form, yet things seem increasingly askew and sinister. Before long, it’s clear dark forces are at work and all kinds of devilish trickery ensue, which I don’t want to spoil.

Initially, I wasn’t bowled over by this book. The prologue concerns the 8-year old boy, Kevin, who misses his dad and is frightened of the closet monster. It delivers the requisite horrors and excitement for a curtain raiser, but seems slightly over-described and didn’t quite hook me as it should. Regarding this character, there are plenty of nice moments when we, as readers, realise certain things that have eluded his 8 year old perspective. But I also thought there were a couple of times when his ruminations were expressed in a form that seems far too adult.

I became much more engaged when we start to meet the other residents going about their daily routines, and the oft-familiar problems of their lives in which the grass is always greener. This is one of several deft themes, and we don’t have long to wait before it all starts to kick off.

The semi-rural village’s sense of place is neatly evoked and the inhabitants themselves are mostly likeable and flawed. They’re painted in some detail so that after a while, the reader knows them intimately enough to allow slightly odd changes in behaviour to become noticeable. This complements the feeling of unease and  makes this homage to small-town old-school horror work so well.

The book is full of clever turns of phrase, and some startling visions that unsettle in a single sentence. This author also has the knack of wry one-line teasers at the end of a chapter, which makes for some theatre. The plot threads are nicely linked and I liked the way that the characters’ individual wishes are not all immediately revealed. They’re teased in as the tension mounts, letting us wonder what manner of hellish trouble they might have accidentally invoked.

Although entertaining, the loud, showcase finale was not quite to my taste, and includes a paragraph of explanatory narration that I found intrusive and unecessary. But I certainly wasn’t disappointed, and the monstrous conclusion provides plenty of surprises and ties up some good concepts with a flourish.

Fearful Festivities is a layered, strongly-themed novel, and manages to dissect the envy and hope that come at this time of year without getting bogged down or losing the sense of grisly fun. It makes for compulsive reading with investable characters, shocks, and that classic feel of lurking menace that should be the essence of any horror tale.

Switch off that Christmas repeat on the telly and read this instead. You’ll never look at a child’s misspelling of Santa Claws the same way again.

One thought on “Review – “Fearful Festivities” by Gary Fry”