As much as a review, this is a bit of information regarding “The Black Land”: a novella of coastal terror by MJ Wesolowski (My review here). The author has written a short story, available to read on his website, telling the story of one of its minor characters.

It’s been several months, but the baleful atmosphere of “The Black Land” is still very much with me, and that doesn’t let up here.

Matty Dunn is the local fisherman who sails Martin, the troubled protagonist, to the grim island of Blamenholm. We find out about his upbringing, schooldays, and memories of his dying grandfather in his weatherbeaten bungalow. Not to mention the menace of the castle, almost personified in the form of a stone that young Matty stole from school.

“That stone; he couldn’t get it out of his mind. Miss McKay left it on the edge of her desk and it sat there, coiled and grotesquely ready, like a bony fist.”

“Matty’s Story” is a must for those who enjoyed “The Black Land” The change of POV adds authenticity through using local dialect, and the tale ties up neatly with the novella that inspired it. Apparently, this story came to be after a plot device involving a gun became too logistically difficult, and I’m glad. This is a far more elegant and chilling way to deal with it.

After a few days of June sunshine spent in pub beer gardens, it was a grey and rainy afternoon, so I thought some old-school terror would be the perfect way to while away a couple of hours. This downloaded novella from Blood Bound Books proved to be just the thing with its baleful castle, ghosts in wolfskins and a splendid descent into madness for all those unfortunate enough to be involved. 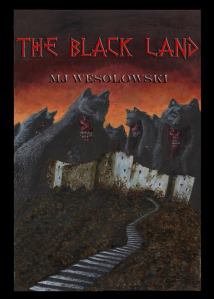 We meet Martin Walker, an American self-made tycoon who owns the exclusive Gateway Resorts. He arrives in North-East England with his wife and two young children in tow, intent on acquiring the remote island of Blamenholm to add to his luxurious list of locations. But the bleak slab of rock is also home to a forbidding and long-abandoned castle that was once garrisoned by invading Norsemen. And it appears that these “Children of Odin” – psychotic wolfskin-wearing warriors high on hallucinogens and bloodlust – are still very much there in spirit.

The tale begins with a brilliant Hammeresque feel as the family visit the storm-lashed rock. I was completely drawn into the malevolent atmosphere as they enter the twisted keep of the castle, a building apparently designed to keep something in as well as out. Not to mention a vast, diabolical trap looming in the shadowed hall that chills the family – and us – right from the start. And that’s before we even know what’s lurking in the castle’s dungeon, about which their English guide Saul is terribly grave but teasingly vague.

They return to a rented mill in the coastal countryside, and things start to go wrong pretty quick. His wife Martha and the kids start to have dark thoughts as nasty ghosts rise from their past, and everything becomes drenched in the same unease that bled from the castle. The rooms plunge cold, things go missing, internal voices start to whisper. Their young son Chad claims to have seen wolves, and pawprints surround the sodden mud around Martha’s car, all of which cements the tone for a genuinely scary ride.

I really enjoyed this novella. The characters are well rounded, filled out deftly with back story as the tale progresses. Although the stubborn, success-driven businessman Martin is not always the most likeable character, we still invest, and soon realise his behaviour – and increasing rage – isn’t entirely in his hands.

While there’s a few familiar tropes, there are some ghastly flourishes of fresh imagination and attention to detail, and I was drawn into world of Blamenholm and the Walker family. I also enjoyed the author’s use of digital technology (such as smart phones) to bridge the gap between the archaic and the contemporary. This particular ancient evil sure can adapt with the times.

What’s also cleverly done is that the family seem trapped, somehow unable to pinpoint and discuss the creepy events with the expected rationality. This creates a slick aura of otherworldliness as the wicked powers do their thing, racheting up the fear.

Ah yes, the fear. What I loved most of all about “The Black Land” is the chills. MJ Wesolowski creates menace through suggestion and a superb malignant presence. This is “bump in the night” horror rather than graphic, and all the better for it. I was startled by the movement of one of our cats in the room, and the rain and wind blowing through the branches of a tree outside my window kept making me glance up uneasily from the page. Creating such edginess on the part of the reader is no mean feat, and is of course the essence of any quality horror story.

I also liked the author’s voice. There is no fixed POV, which is unusual nowadays, but used to good effect here. It gives the whole thing a classical feel and provides sinister narrated observations of which our protagonists are unaware. The prose is also very descriptive – which isn’t usually my thing – and although I found it slightly off-putting at first, I soon settled in. Stick with it, stalwart reader, because this style brings evocation and grim atmosphere by the bucketload.

The conclusion also delivers. The final few chapters tie up all the loose ends, some of which I’d forgotten about, and there are a few surprises as everything descends into nightmare. My anticipation was stoked throughout the first half, and rewarded by a noisy showdown of subterranean, primordial dread.

I will definitely be checking out more of MJ Wesolowski. “The Black Land” is great value for money at 111 pages – available in print and download – so if you fancy a seamless meld of classic and modern horror, give it a whirl. Just don’t read it alone on a rainy night. Actually, do read it like that. Because hey, we’re all a bit tweaked in the head and that’s exactly why we love this kind of thing.

Please click on any of the above links should they interest you and support the wonderfully rum bunch of people involved in the world of macabre and imaginative fiction.