Lorcan Carmody is scared. He can’t understand where he is or why he’s there. Strange people surround him… and a monster lurks in his room. Is the monster real or imagined? 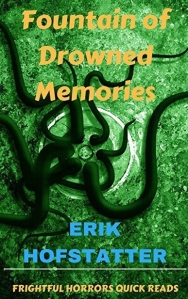 This tale from Frightful Horrors – a UK small press dedicated to our love of weird fiction chapbooks but presented in easy digital form – is quite a triumph given its length. It took less time to read than to write this review, but leaves quite a melancholy malaise upon putting it down.

We meet Lorcan Carmody, trapped in a strange bedroom and losing his memory. He becomes obsessed by the shifting stains on the ceiling and also the sink in the corner – which he knows as the fountain – as he struggles to recall words, the past, and even his own identity.

At first, the fountain seems to have healing properties and is the only thing to bring him peace in his confusion. But when it sprouts monstrous tentacles, Lorcan begins to wonder if the fountain is actually draining his precious memories. He’s occasionally visited by other people, but is suspicious that they’re colluding with the fountain and his insidious loss of recall.

This short story took me by surprise. It’s instantly engaging and easy to empathise with Lorcan’s fear and frustration. The prose is robust, evoking the rain, the trees and figures that he glimpses out of the window, and suffusing the whole account with loneliness. This elegiac tone is accentuated by glimpses of normality – such as memories of drinking in pubs and the smell of bacon – but nothing lasts, and even these brief snippets only bring him more misery as they become tainted and dissipate.

Any piece like this initially keeps the reader guessing as to his plight. Is Lorcan a prisoner? On drugs? A mentally ill patient with paranoid delusions? Suffering from dementia? Or perhaps he’s being menaced by actual supernatural horrors? It gauged my subconscious questions well, and everything falls neatly into place.

Fountain of Drowned Memories certainly leaves a mark, laying bare the fragility of mental health. Whether any of what Lorcan believes is actually true – the fountain’s tentacles, the conspiratorial visitors – almost becomes irrelevant. His claustrophobic existence is all, and this story presents how trapped someone can become by environment and more importantly, their own capsizing psyche.

I was lost to Lorcan’s descent as the tale progressed, and the last few pages are heart-breaking. It’s rare that a work of this length (only about 14 pages) can elicit such feeling and Erik Hoffstatter ensures that he has finished wringing you out before most poignant fiction of this kind would’ve even got into gear.

A slick combination of Lovecraft and McMahon, it’s available for free on kindle/pdf download here.

Please click on any of the above links should they interest you and support the wonderfully rum bunch of people involved in the world of macabre and imaginative fiction.
Loading Comments...
Comment
×