“From murderous children to nightmarish trips to an ill-fated zombie apocalypse, Corpsing will send you running for the light switch, but smiling as you do it.”

The blurb on this varied collection of eight stories from the Sinister Horror Company pretty much sums it up. I love a good meld of comedy and scares, and it soon became clear that as well as the writing ability, Kayleigh Marie Edwards has both the requisite glint in the eye and the passion for horror to make this work. 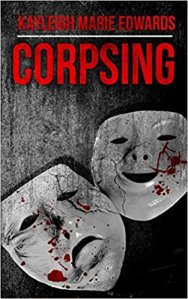 Starting things off is “Bitey Bachman” in which we meet an asylum security guard named Brian. When a patient accidentally receives a mystery injection, the scene is set for a zombie apocalypse, and Brian is ready. He’s spent a lot of time thinking about such eventualities, but unfortunately, it kicks off while he’s in the middle of taking a shower. This tale is a good showcase for the author’s humour. It’s full of sharp prose and neat references to zombies in popular culture, and the finale is a refreshing change from the usual path of outbreak stories.

“Bits and Bobs” tells of hospital worker Steven, hoping to secure a job at the Body Farm: a unique U.S. morgue where unclaimed corpses are used to train CSI teams. After failing the interview, Steven gets drunk and decides to sabotage one of their fake crime scenes with his own DNA and thus ruin the next training exercise. But during his inebriated vandalism, things take a horrific and bizarre turn. There’s shades of Jasper Bark here, and a double-whammy of gruesome extremity is written with such nonchalance – and followed up by playful humour – that I had to applaud.

“Siren” follows the plight of Lucy, eleven years old and moving to a quiet lakeside home with her mother. She hates the house, misses her dad, and wants to leave, but there’s a spooky little girl living in the lake with other ideas. Lucy’s perspective of all things adult is spot-on, as is the pathos, and although comedy takes a back seat to the creepy atmosphere this time around, it still has a pleasingly wry finale.

There’s no ceremony or build-up in “Now You See Them” in which we find a terrified boy tucked up in bed, trying to keep quiet and terrified of monsters in the dark. Excelling in evocation, this is a ghastly short.

“Skin” features fifteen year old Amy, full of insecurities and angst. Her life capsizes after she’s bitten by a spider and becomes horribly infected, and then discovers she’s pregnant. Dumped, short on friends and grounded by her furious and disappointed father, I was drawn into Amy’s miserable plight. Sporting a real aura of claustrophobia and helplessness, this story tackles attitudes of shame towards teen pregnancy, self-harm, and nails the emotional whirlwind of its protagonist. But it’s certainly an adult piece, trickling in physical horror elements and finishing on a sour twist.

After all that horror, “S-day” changes the mood. We are cordially introduced to a whining child named Bobby who, on this occasion, has decided that he wants some chicken soup. When refused by his exasperated mother, Bobby starts to pray. But such is his talent for irritation, he even annoys God who loses his rag with appropriate biblical theatricality and rains down a mighty plague-flood of meaty soup upon the world before anyone has even had time to build an ark. A mischievous fable, this balances the darker pieces in the collection.

In “Barry’s Last Day” we find a construction worker on the cusp of retirement. But rather than being happy about his imminent freedom, Barry is fed up at the prospect of having to spend more time with his wife and stoner son, neither of whom he particularly likes. On top of that, he’s also perpetually annoyed that a 20-something graduate called Todd – of all things – had recently stolen his promotion.

So Barry decides to get last day revenge on young Todd with a cunning plan involving some magic mushrooms and a flask of coffee, but naturally, things don’t go the way he planned. Barry’s an entertaining miserable git of a lead, and I was won over by twists, turns and a splendid conclusion. This would’ve sat proudly in a Pan Book of Horror, as indeed would a couple of the other pieces here.

Finally we have “’Twas the Night before Christmas” in which two young boys realise that their Christmas tree is not only possessed, but also a nocturnal killer. Obviously nobody believes them, and it’s to the author’s credit that we roll with the outrageous concept. This tale has a light style, which makes the grisly elements more amusing yet strangely darker.

I read Corpsing in one sitting, not just because it’s a svelte 150 pages, but because it’s so easy to digest. The author lures us in with intriguing ideas, forces us to invest through convincing characters and dialogue, then takes us on all kinds of horrific and uncomfortably comical descents in which we’re up to our necks with the hapless protagonists whether we like it or not.

This is character-driven horror, and the people we meet are flawed and real, their perspectives tight regardless of age or gender. It has both new ideas and twists on old tropes, and of course, plenty of macabre humour. This sometimes causes a smile, other times a visceral wince, but generally both at the same time. With such a well gauged tone in place, I found it impossible not to be charmed.