I got the impression that this new horror novella from Dark Minds Press was a tribute to the shock cinema and pulp novels of the 1970s and 1980s. I wondered if it would be a re-tread of that era – warts and all – or a contemporary update, and it’s actually a bit of both. Lurking beneath that splendid cover is an exciting story that squeezes out the lesser elements of its source inspiration, and concentrates on the ride. 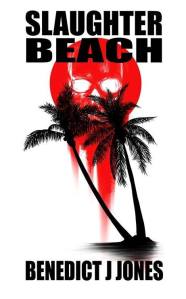 The story is appropriately simple and familiar. It’s the late 1970s-ish in a non-specific tropical harbour town where we meet Don Curtis: a jaded Vietnam veteran who scrapes together a living with his boat. But Don’s humdrum life changes one day when his boat is chartered by a glamour photographer, Marshall, to take him and his entourage to a remote island for a photoshoot and an excuse for a party. But guess what? The island is already home to a blood-thirsty killer, so it’s not long before gouts of arterial spray and severed heads are ruining the postcard scenery.

While a pseudo-homage requires the cast to be of a certain expected stock, the characters here are 3-dimensional enough to avoid being dull. Don Curtis steps us as the tough, investable hero who can play the killer at his own game, and Marshall assumes the role of coke-snorting rich bellend. The assorted assistants, glamour models and local crew hired for the trip provide plenty of knife fodder for our murderer, but one cliché they don’t observe is the bad dialogue of the old-school shocker. The plentiful conversation is natural rather than absurd which keeps both the story and our interest alive.

This is what I like about “Slaughter Beach”. Given the very nature of its inspiration, there’s little originality, but the author has tweaked it for the contemporary reader. As well as the polished lines, he opts for intelligent and resourceful female characters instead of squealing damsels in distress. In fact, Tammy – the photographer’s personal assistant and potential love interest for Curtis – always looks like being one of the few characters who might make it through by her own steel. While the author sprinkles in pleasing grindhouse tropes, these cause a fond smile rather than a groan and I didn’t experience a single “Oh, please…” moment. It’s a fine line, but Benedict J Jones has gauged it well and also ensured his tweaks don’t kill the gorgeous retro vibe.

For a novella-length thriller, “Slaughter Beach” pretty much ticks all the boxes. It’s well written and the atmosphere of isolation is bang on from the sticky heat of day to the unnerving shadows of night. Once it gathers momentum, the story is a blast as the rapidly-depleting group are hunted down and exterminated in graphic and grisly ways. The menacing aura of the hunt is relentless, death often catching you unaware, and although some of the characters are rather likeable, that doesn’t stop their brutal executions from being enormously macabre fun.

As the story peaks, there are a couple of surprises in wait and I really enjoyed the finale. It wasn’t expected, and rounds off the tale on a suitably gruesome and impending note.

“Slaughter Beach” is the first novella from Dark Minds Press and I hope there are plenty more to follow. This gripping but subtly modernised nod to the lurid, bloody fun of the 70s and 80s is a fine way to spend a couple of hours.