This new collection from ChiZine Publications promises monsters of all kinds, and certainly delivers. There’s the taloned and grotesque, malevolent ghosts, myths, and of course plenty of the human variety tormented by personal demons. But this imaginative book is not just about the scares. Ray Cluley infuses his writing with a raw humanity that provides melancholy and deeply touching moments, not only balancing out the horror, but enhancing it enormously.

First off, “All Change” introduces Robert, an ageing monster hunter. We find him covertly patrolling a railway station to protect us from the horrors that travel the country disguised as human passengers, but maybe the reality is not quite as simple as that. A slick tale that embraces the genre we love, it gives us a smile before one of the more sobering pieces of the collection.

One of my favourites, “I Have Heard the Mermaids Singing” is the account of a journalist at a poor fishing community in Nicaragua. He hopes to write an article highlighting the dangers of decompression sickness – the bends – faced by hardworking locals who dive for lobsters to earn a crust. Locals who also believe that water demons are to blame. Told in the first person and present tense to great effect, Cluley really showcases his talent for evocation of place, and the characters become people we feel we’ve met. Combining folklore, grief and a powerful narrative voice, this is a frightening but strangely tender story and presents a social conscience that erodes none of its power to enthral.

Snaring us in a very different way, “The Festering” has a fitting title given the way it leaves a dirty taste after reading. We meet Ruby, a schoolgirl who lives with her hard-drinking mother. She has a secret drawer that’s home to a repugnant, shapeless creature to which she confides all her secrets, but the truly ugly element comes from Mr Browning. He’s a predatory teacher who babysits for Ruby when her mother goes to the bingo, and this thread really gets under the skin. Ruby’s point of view is flawless, and the plot combines icky fun with depressing reflections on humanity to keep us guessing until the end.

More bleakness follows in “At Night, When the Demons Come” and as a sucker for post-apocalyptic fiction, this quickly became another favourite. Superbly narrated by Charlie, we visit a crumbling world of decay and paranoia where the scavenging survivors live in terror of shark-toothed, winged demons. As these creatures are female, women become the enemy of religious crackpots and misogynists everywhere, and the whole thing presents a fresh angle on the usual gender politics of post-apocalypse fiction. Exciting, thought-provoking and horrible, this is a faultless short horror story.

“Night Fishing” finds Terrence – a San Francisco fisherman – struggling with the loss of his love, Bobby, to suicide. An elegiac and tragic piece in which sexuality plays a strong role, we follow Terrence as he experiences visions and the ghosts of other lost souls beneath the suicide hotspot of the Golden Gate Bridge. The emotion bites deep and this story works in its simplicity.

“Knock-Knock” follows J-J, a young boy who lives with his mother. They’ve recently escaped an abusive relationship, but J-J’s nights are disturbed by an ominous knocking at his bedroom door that suggests the past is on its way back to torment him. Considered and tense, it teases us with the possible presence of the supernatural, and the author creates a convincing point of view for the young lad.

I certainly won’t forget “The Death Drive of Rita, nee Carina” in a hurry. A woman who lost her family – and most of her face – in a car crash is reborn through a warped crusade to please the gods of the road by deliberately causing accidents. It has the graphic and visceral impact of J.G. Ballard’s “Crash” – the sexual fervour exchanged for a religious kind – and plays deftly with common fears. Ghoulish curiosity drew me right into Rita’s descent and the ensuing voyeuristic guilt makes for an edgy, uncomfortable experience. A polished piece of macabre storytelling.

In “The Man Who Was”, our narrator – an eloquent gentleman who works as an event planner – meets a veteran Gulf War hero and the two embark on a secretive and complicated relationship. Tackling the consequences of war and masculinity, this is another emotive journey with a powerfully distressing reveal.

“Shark! Shark!” brings a complete shift of tone with a humorous whodunit that concerns the filming of a B-movie. It nails all the clichés, delivers plenty of droll dialogue and sports a pleasingly gruesome conclusion, but it’s the narrator’s wry comic voice that really carries it. A refreshing interlude between the heavier tales either side.

A strikingly dark and original story, “Bloodcloth” introduces Tanya, an adolescent who lives with her parents in a poor industrial village of no specific time or place. Their sparse existence also requires that blood sacrifices be made, and the author weaves lore and vampire overtones together with a feminine emphasis. Although I confess to getting a bit lost towards the end, there’s a great sense of otherworldliness and Tanya is a solid lead.

In “The Tilt”, two gay friends – Luke and Nicky – visit the picturesque French town of Carcassonne. It’s rather pleasant at first with a beautifully scribed locale and lots of natural banter between the two characters, but of course ghostly dreams and shenanigans involving the fortified town’s castle aren’t far away. I found this to be as much about history, friendship and sexual identity as anything else and it all falls neatly into place as one.

“Bones of Crow” takes us to a more gritty urban setting. Maggie, a lonely woman with health problems of her own, lives with her disabled father in a city block of flats. One day, she discovers some huge eggs on the roof and spies an enormous, winged creature lurking in the park nearby. Lush with metaphor, this is a fragile and moving piece with an appropriately opaque pay-off.

I particularly enjoyed the unsavoury “Pins and Needles”. James has an anti-social needle fetish, and having anonymously wounded a woman on the bus with a needle planted in the seat, he strikes up conversation and they begin a relationship. Creepy and compelling, this story has a great sense of inevitable doom. It also rocks a lurid punchline that I initially thought lessened the overall aura of darkness, but thinking about it afterwards, I realised that it just deepens it.

“Gator Moon” begins with two rednecks burying a body in a Louisiana cane field. Broaching racism without fear, this short drama is handsomely evoked, and I saw a supernatural element but – as explained in the afterword – it can be taken either way.

“Where the Salmon Run” is another moody location piece. We meet Ana, possibly pregnant and returning home to Kamchatka: a hardy Russian fishing territory where poaching is rife and salmon have worked their way into local religion and myth. This is an achingly human story that lets you decide what’s real or otherwise, and consumes you with the biting cold and rugged environment while you try to make up your mind.

It’s to the Wild West for “Indian Giver”, introducing Grady and Tom drinking liquor on a porch at dusk. Tom tells of his experience helping with the forced relocation of some “injuns” that goes awry and results in murder, and the telling is just as important as the tale itself. Grady’s jaded wisdom, as he listens to Tom’s account, adds a neat frame to the plot as it builds to a spooky finale.

“A Mother’s Blood” is a sharp short about an exhausted mother cracking beneath the trials of parenthood. I wasn’t sure if it was meant to be grim or amusing, or perhaps a bit of both. Either way, it works.

This sour vignette segues neatly into the next as we meet Matt – also fed up with the drudgery of life – in “The Travellers Stay”. On the road with his wife and her teenage son, with tempers suitably fraying, they stay at a faded boondock motel that’s infested with roaches. A familiar scenario initially, the domestic unbliss soon becomes an insectoid nightmare in this apparently Kafka inspired and surreal creature-feature.

“No More West” is a weird flash piece concerning a weary cowboy’s encounter on the barren plains. It baffled me completely on first reading, but ladles on the atmosphere and sets us up ready for the finale piece.

Collections tend to save a belter until last, and I think “Beachcombing” qualifies as the crowning glory of this book. It’s a grey, damp morning as we find Tommy, a young boy collecting discarded items on the beach. He has an empathic gift that allows him to feel the past of an object by touch, to see snippets of the lives of the people who last owned or handled it. Tommy’s point of view is perfectly realised, especially his confusion at the adult feelings he encounters such as the nervous excitement emanating from a condom wrapper. But he also feels the sadness and negativity of the items he finds, and becomes curious about a man he keeps seeing staring out to sea. This story is completely enthralling from the off, and we soon realise that although Tommy’s gift tells him much, he’s limited by a lack of life experience. As readers, we are not so encumbered, and Tommy’s innocent perspective on darker events is used to heart-breaking effect.

A poignant and sublime piece, “Beachcombing” is not the finale I would perhaps have expected from this book, but I wouldn’t have had it any other way. Superb.

I had a splendid time reading “Probably Monsters”. Ray Cluley has a refined and seamless storytelling style, and his evocation of place is immaculate. He knows whether to finish on a concrete or inconclusive note, when to deliver a twist, and can turn his hand to sinister suggestion, wrenching sadness or grisly fun with equal finesse. But it’s the characters that really drive these imaginative stories, brought to life by nuances of human behaviour and interaction as well as their tangible hopes, fears and demons.

Thoughtful themes trickle through the pages, and it also seemed to me that the stories are carefully ordered with this in mind. Rounded off with some interesting story notes at the end – I always enjoy these – this is culturally rich horror that takes us to some fascinating nooks of the world and a fine book in which to lose yourself. Whether you enjoy the kind of fiends that lurk under the bed or those that grow in your heart, “Probably Monsters” is waiting for you. 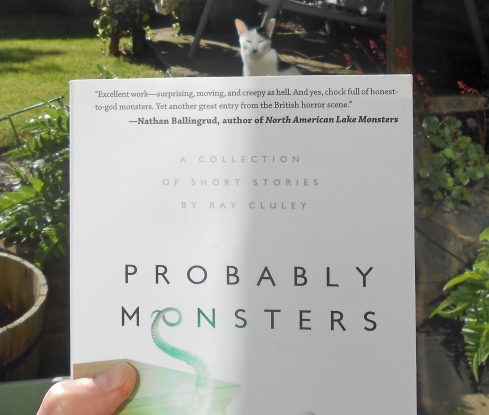