I was looking forward to this novella from This Is Horror, having enjoyed a short story of Ray Cluley’s in the “Dark Minds” anthology a couple of years ago. It stuck in the memory for merging a wild concept with heart, and I was pleased to discover that “Water For Drowning” takes this to the next level. 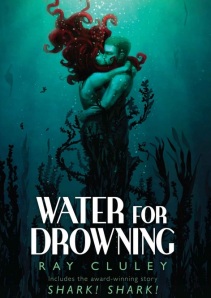 It’s narrated by Josh, a young lad in a rock band who lives with his mates near the Isle of Wight. Playing mainly cover songs in pubs and clubs, they enjoy just enough success to pay the bills and Josh cares for little else but gigs, booze and groupies.

But when Genna – a wistful girl with a fascination for mermaids – repeatedly turns up to watch them play, Josh finds himself attracted. She loves it when he puts his own material into the set, particularly those songs about the sea, and Josh is drawn by the mystery as well as his own ego and lust. But as he gets to know her, Josh realises all is not well. Damaged by her past, Genna’s mermaid obsession doesn’t stop at her seaweed tattoos and interest in folklore. She also drinks seawater, self harms and genuinely believes that she can become one.

This is a beautifully written piece. From noisy nightclubs to the cold ocean, this story is haunting in both its evocation of place and also the sheer longing that Genna projects. It drew me in straight away, intrigued as to how this young hedonist was going to deal with someone so fragile, dangerous and unpredictable.

Josh is a convincing character and a great voice for the tale. He and his friends are not the best of folk – brash, crass and in it for the girls – but this gives him plenty of room to evolve. His amusing observations and crude wit also balance the tone, preventing it from becoming too intense.

Despite his laddish attitude, Josh realises that the troubled Genna has massive potential for self-destruction. This forces him to actually think about consequence and their relationship evolves naturally from here. We know he cares about her and desperately don’t want him to mess it up for both their sakes, but even the moments of warmth are tinged with sadness. We want Genna to be okay, to achieve the peace she yearns, but we can’t shake the feeling that this is an inevitable slow spiral into increasingly dark waters.

With regards to the folklore, this novella had me guessing if there were actual supernatural forces at work or if it was purely the portrayal of an unravelling mind. The plot teased both possibilities, though it becomes almost incidental to the emotional resonance as it builds to a powerful conclusion.

And that’s the essence of “Water For Drowning”. A poignant meld of fairy tale and contemporary drama that washes over you like a swell. Ray Cluley is a thoughtful and sublime storyteller and I was surprised at how much I cared. One of those rare tales that left me in a reflective, melancholy mood.

Note: This story also comes with an author introduction about the genesis of “Water for Drowning” and a bonus short story “Shark! Shark!”. Concerning the shooting of a B-movie, this clever and darkly humorous horror whodunit won a British Fantasy Award in 2013. It made me grin and ties up this little package nicely.

One thought on “Review – “Water For Drowning” by Ray Cluley”

Please click on any of the above links should they interest you and support the wonderfully rum bunch of people involved in the world of macabre and imaginative fiction.
%d bloggers like this: