Remember that name I said to myself the first time I was recovering from one of Anna Taborska’s  stories. It was a tale that drew blood, evoked with haunting imagery and almost unbearably poignant.

A few years later, Mortbury Press have done the only sensible thing to do, and put her name on the cover of a full collection. This was eagerly anticipated here, and as well as enjoying some excellent new tales, I also discovered that the familiar ones were just as good the second time round, sometimes even better. 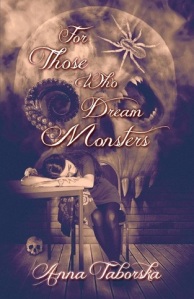 After a bang-on introduction by Reggie Oliver – who also provided a perfect black and white illustration for each of the stories – the book gets off to a strong start with “Schrödinger’s Human”. This concerns a professor with a horrendous penchant for cruelty and killing whose life changes when a scruffy black cat arrives on his doorstep. This tale really appealed to my car-crash-peering ghoul as it ratchets up the nastiness until the Pan-esque finale, bringing expert touches of black humour to counter the sourness of tone.

Next is “Little Pig” which begins with Adam, a nervous man waiting to meet his Polish girlfriend’s grandma Irena for the first time. The story then whisks us back to Irena’s childhood, fleeing wolves through the snow of wartorn Poland with her siblings and mother. As well as the pure adrenaline rush, this section packs an emotional punch when a hideous choice has to be made for the family to survive. The conclusion is elegant, functioning as a neat bookend, and the whole thing demands much investment for such a short piece. I also liked the juxtaposition and glimpse into the hidden layers of people’s lives, and perhaps there’s also a reflection on the relative triviality of our first-world troubles.

A lighter but violent revenge story, “Fish” concerns the exploits of a wrongly-murdered postman. Playing out like an episode of  Tales from the Crypt, it left me slightly wanting, but is well paced and cemented with dark humour.

We visit a poor village in Africa for “Buy A Goat For Christmas”. The locals receive a decommissioned tank from charity, intended to be dismantled and fashioned into farming tools by the local blacksmith, but then a visiting backpacker begins to display lycanthropic tendencies. The scene is set for quirky gruesomeness, and it sits well with the next tale, “Cut!”, which features a film director who’s a bit of an arse. He hires a bad actress on a whim, gets much more than he bargained for, and I smiled at the unashamed, old-school horror punchline.

“Arthur’s Cellar” is an interesting and memorable experience. It describes a man hunting an escaped creature his grandfather kept in the cellar of his remote forest house. Particularly evocative, there’s a strong pay-off, and I never quite managed to decide if was meant to be fun or disturbing. Which is no bad thing.

Cruelty and humanity abound in “The Apprentice”, a historical account of a violent village baker who hires a mute apprentice. It’s a slick read, and the finale – once again – is pleasingly dark.

Turning down the lights further is “The Girl in the Blue Coat”. A journey of discovery drizzled with the supernatural, we follow a travelling journalist wishing to interview Jewish people about their experiences of the holocaust. Horrible but elegiac and respectful, this is one of those rare pieces that manages to be both humble and humbling.

“A Tale of Two Sisters” is a Shakespeare-themed pair of stories, set in rural Poland. Part I is “Rusalka” in which a young man is bewitched by a village girl. It was tainted for me by a personal annoyance – elusive figures that invite pursuit – but the trope was well handled and I was still drawn into his obsession. I preferred Part II – “First Night” – in which friends Dan and Henry end up holidaying in a place where betrayal killed a broken-hearted village girl escaping the lust of a local Count. It really brings the folklore to life, and rouses just anger amid all the striking cinematic imagery.

A couple of lighter genre pieces follow. In “Halloween Lights”, we join a lost soul approaching a rural town on Halloween. It triumphs by forcing us to guess throughout what happened to our baffled protagonist. Is it a man who’s been in an accident? Perhaps it’s a confused werewolf or some other night creature? Following this is “The Coffin”, in which a man takes a shortcut through a cemetery and spies an unattended coffin that begins to cause him much distress. I found the concept a bit odd, and the ending was rather too familiar, but it’s impressively creepy for a story so short.

The author’s talent for evocation soars for “The Creaking”, involving a forest, a gentle herbalist named Alice, and some villagers with a violent paranoia regarding witchcraft. A well rounded piece, there’s brutality, kindness and a terrible shock. It’s nice to read a proper adult fairy tale sometimes, and this ticks all the boxes right down to the benevolent heroine and the destructive power of ignorance.

The 2nd in this trio of stories touching on gender egos and sexuality is “Dirty Dybbuk”. We meet Mitzi, a prudish Jewish student who succumbs to some kind of nympho-possession. It seemed a bit rough towards the end, and I was jarred slightly by some stylised narration, but it’s a wry and a self aware distraction from the heavier tales that loom either side of it.

Which brings me to the memorable “Underbelly” in which we find Anna, a woman dying of cancer. She encounters a demonic bat-like carnivore in the cellar of her building that promises to take away her pain, but for a terrible price. It’s so well executed that the somewhat familiar set-up didn’t spoil the intensity, and there’s just the right balance of bleakness and hope. The characters particularly shine, and moments of sweetness and humanity occur when we might’ve been hoping for brutal revenge: extra credit to the author for this deft emotional play.

“Tea With The Devil” is exactly that: an endearing discussion occurring in a rough estate on Halloween where it seems that the great horned one may be having a change of outlook. I feel unqualified to properly review “Elegy” – a poetic short about a magic lake on the site of a sunken inn – as it is a homage to Bruno Schulz, with whom I’m not familiar. I suspect nuances may therefore be lost, but I still enjoyed this colourful showcase of folklore and atmosphere.

Save the best ’till last the saying goes, and that’s certainly the case here. “Bagpuss” is the tale of a 12 year old girl, Emily (of course), who moves with her mum and beloved pet cat from the city to the countryside, bringing new fears and freedoms for all. This story wields such evocation and place that it’s like memory, aided by enormous emotional investment. The characters are perfectly realised, including the cat, and I even loved the dream sequences, which I often dislike in fiction. There’s so much going on here – themes of cause and effect, loneliness, innocence, the fragility of life – that it makes for compulsive reading and builds to an unforgettable finale. I still keep thinking about it and feeling sad, and might actually be slightly traumatised. But I’m going to read it again.

For Those Who Dream Monsters is a rewarding collection with its contrasts of compassion and cruelty, submission and hope. Anna Taborska is a superb storyteller, capable of extraordinary sense of place, characterisation, and rarely have I been floored with such poetic punches. Relationships are poignant, in so few words, and she can switch between the male and female voice without a stutter.

As Reggie Oliver said in his introduction, it would be exhausting to list the variations of location, theme and tone in this book. I agree, and suggest that you take the journey for yourself.