Just like Dark Minds – its predecessor from last year – this book is simply subtitled “An Anthology of Dark Fiction”. A solid, tactile paperback, it impressed me from the off with its cyberesque cover and decorated author and contents pages. There’s no editorial credit or introduction, the proceedings simply presented by Dark Minds Press, which whether deliberate or not, makes it a pleasingly mysterious entity. And that entity has gathered together an impressive collection of 15 disturbing stories. 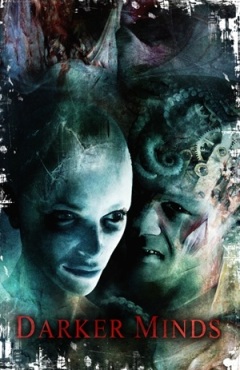 The theme is simply the power of the mind. There’s grim tales of abduction, mental illness and domestic paranoia. There’s wry tales of possession and graverobbery, and plenty of askew and threatening realities. It’s a book where nothing ever seems quite right, but is that really the case, or just the delusions of an unravelling mind?

So onto those stories that particularly stood out. First is “Reflections from a Broken Lamp” by John Travis, a violent murder mystery explained from varying points of view. But although it begins with an air of whimsy, the author gradually turns down the lights and establishes an appropriately dark tone. John Travis’s fiction has real personality, and this colourful creepshow makes a great curtain raiser.

Equally memorable is “Slip Inside this House” by Daniel Kaysen in which we meet Clive. He believes he’s being persecuted by some kind of note-scribbling “double” that’s causing havoc in his marriage. An intriguing piece cemented by convincing characters, it has plenty of tricks up its sleeve.

Stuart Young’s “Houses in Motion” is a well-written story narrated by a man who bumps into his former nemesis of a boss. But he soon realises that the old bully is now withered by dementia, setting the stage  for a poignant and sobering reflection upon reality and the consequences of detachment.

“The Way of the World” by Gary Fry introduces Oliver, a young student on holiday with his new girlfriend and her parents. The author doesn’t miss the opportunity for some awkward dialogue and sexually-charged scenes, which all serve to maintain the unease in this sharp and well realised story.

For me, two neighbouring pieces form the anthology’s peak. First is “The Man Who Remembered” by Stephen Bacon. Lisa is waiting for her boyfriend in a café and speaks to an old gentleman who claims to know the details of his own immiment death. This perfectly evoked tale is all about life, the intricacies and effects of existence, and concludes a thoughtful concept with a bang.

Second, I also loved “Waste Disposal” by Ray Cluley. This concerns Walter, a gentle widower, who is caught short walking his dog in the park and runs into some menacing youths. It begins with a melancholy yet stoical flavour, but soon descends into unease, and then sickly fear. Natural empathy, pathos and a masterful ratcheting up of the threat make this a very immersive experience, and I wouldn’t dream of spoiling the wild and grossly imaginative – or is that imaginatively gross – finale.

While we’re reeling from that, Robert Mammone takes us on a very uncomfortable journey with “Seeing Things”. This features a pair of lovers on a trip to winery, but our narrator is troubled by sinister shapes lurking in his peripheral vision, and a guilty accident ensues. Despite a couple of formatting and spelling errors, this is a heady and intoxicating experience that saves a grisly punch for the pay off.

The finale is a masterpiece of bleak cinematography. Gary McMahon leaves us with “Cinder Images”, a brutal short centred around the screening of a war film. It has all the author’s trademarks – satire, anger, vicious elegance – and also an intrusive conclusion that perfectly rounds off both this story, and the book as a whole.

I enjoyed this anthology. With a no nonsense attitude, it allows the fiction to speak for itself. There’s the occasional guessable twist, and a couple of the stories were slightly less conclusive than my tastes would’ve preferred, but there certainly aren’t any hangers-on. All 15 authors have worked the theme hard, and spoil us with crumbling sanities, nightmares and cruel consequences galore.

Darker Minds is recommended for those who like to find substance lurking in the darkness. Order here.