This new novel from Solaris charmed me before I’d even bought it. Firstly because it was championed as the greatest supernatural chiller that Hammer never made. Secondly, it combines hell and trains, both of which are personal favourite canvasses for a yarn. And lastly, it sports a deliciously loud and cinematic cover by Graham Humphries. 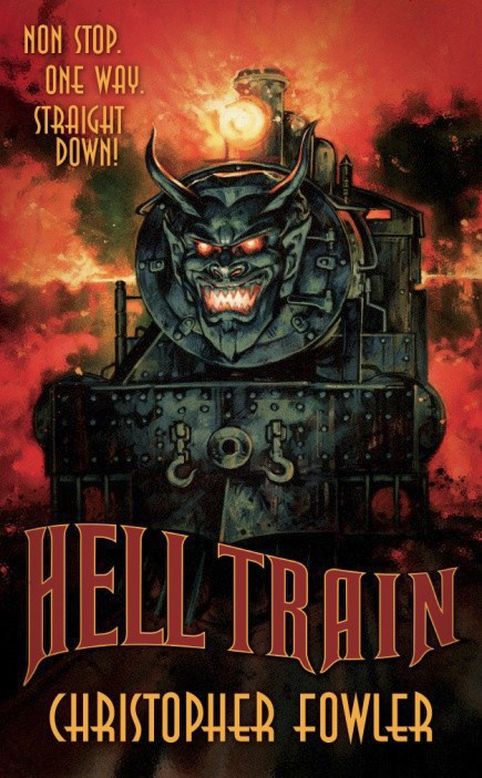 Like many horror fans, I’m deeply fond of Hammer, and I hoped that this would turn out to be a worthy homage. “Hell Train” certainly is, and also keeps a few surprises up its sleeve.

The tale begins with Shane Carter, a recently dismissed Hollywood scriptwriter, who arrives in England hoping to find work. He visits the home of Hammer Studios – an oak-beamed 17th century mansion – for an interview with the boss. After a rather jovial and tea-infused chat, he is given just a few days to write a script with one polite requirement. “We rather liked the idea of a train.”

This forms a wraparound for the novel, and having being introduced to the existence of an old board game by the name of Hell Train, the internal story begins.

War is spreading across 1916 Eastern Europe, and two lively couples find themselves out of their depth in the sinister village of Chelmsk in the Carpathian region. And where else? Thomas is a stuffy vicar, whose holiday with his wife Miranda has gone somewhat awry and Nicholas is an awol lothario with designs on a local village girl, Isabella. The English protagonists struggle with the aggression and ill manners of these farming peasants, to some amusing effect, and are soon forced to escape. But the only way out is a mysterious train, of which locals will only speak in suitably hushed and nervous tones, which arrives at the dark village station at midnight.

They inevitably board, and meet plenty of other rum folks as the train begins its journey into the rural night. The supporting cast includes a beautiful Hungarian Countess with a pack of tarot, a dead aristocrat in a coffin, and the grim and authoritative conductor. The protagonists begin to be tested in some way, but do they have a chance at redemption? And where exactly is the train’s destination, strangely blotted out on all the maps? As if we didn’t know. Hehe.

The author’s prose is sharp and clear, bringing to life a strong bunch of characters. They are understandably motivated despite their varied backgrounds, and perfectly resemble the cast of a classic Hammer outing while still being investable individuals. It’s also a nice touch that we are gently nudged into envisioning the train’s conductor as the “terribly tall and grave” Christopher Lee.

The thundering train itself is also perfectly evoked as it cuts through the ravines and wolves of the landscape, indeed a character itself. And while this is never a desperately scary novel, the pace never lags, and there are some tense and cruel scenes to balance the lurid fun. The wraparound story supplies much fond nostalgia and humour, and shovels in plenty of wry references to the film industry, censorship, Hammer’s rivalry with Amicus, and the familiar actors we know and love. And it isn’t afraid to play with stereotypical 60s Englishness: the essence of the studio.

I struggled to find fault. There are a couple of typos, and one of the main character’s tests aboard the train wasn’t quite as interesting as the others, but I’m being picky. This has all the satanic ritual and heaving cleavage you could hope for, along with clever stalemates, breathless action and generous spurts of modern gore. The cinematic tone is well evoked throughout, lending theatre to the peril, and merging with the classic novel stylings. And although it embraces many genre tropes in homage, this book avoids the pitfalls of a cliched finale. Does good triumph over evil, or is there some kind of diabolical punchline? Is it happy or bleak? Relax. Christopher Fowler’s got you.

If you’re familiar, “Hell Train” is a glorious tribute to the 60s horror cinema of Hammer. If you’re not, it’s still a gruesome and delightful ride that completely blows the budget.

One thought on “Review – “Hell Train” by Christopher Fowler”