The smoky, ethereal artwork of Daniele Serra is the perfect face for this book: like the stories inside, it seems to become more unsettling with time. 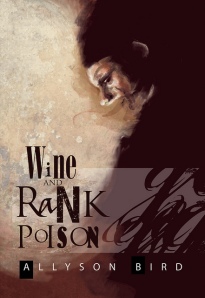 Like Allyson Bird’s last collection, the award-winning Bull Running For Girls, there’s drama, horror, dark fantasy and everything in between. A couple of the stories left me somewhat confused, but the evocation is extremely well done and the author favours a more succinct prose style to transport us to these strangely-peopled places.

First up, “The Black Swan of Odessa” takes us to a harsh 1920s Ukraine winter. We meet hard-up playwrights, Petrov and Ilf, who hear that a legendary chair stuffed with treasure might be closer than they thought. The period detail is perfect – I feel as though I’ve actually visited their bleak little flat – and it’s brought to life with prickly comic touches to the dialogue, although the finale felt somewhat out of the blue.

Next is “The 12th Chair”, which refers to the aforementioned treasure: all stories pleasingly link the previous one in some way. Here it’s present day and we find a nobody called Theo Bitter on his way to Odessa to round up his wayward internet bride. It’s a colourful trip with a wry sense of humour that doesn’t lessen the impact of a fiery conclusion.

One of the peaks is the wonderfully-titled “Vulkodlak”. A searing tale of extreme Serbian nationalism and lycanthropy, it reflects on the failings of our primitive tribal natures and brings a strong sense of place to horrors both imagined and real.

“Atalanta” is the first of 2 stories of heavy mythology. An inventive tale, it jumps between the eponymous heroine and her adventures with Jason and the Argonauts, and Vesna, an oppressed woman who meets a powerful witch. When the two timelines link, the tale becomes much more than the sum of its parts.

Next we meet Cleopatra and plenty of mythological creatures in the erotically charged, dreamlike “Beauty and the Beast”. Although a fun ride, by the end, I had no idea what was going on.

“The Convent at Bazzano” returns us to the present, following a young family staying at an old convent near Rome. It has a palpable holiday feel and a pensive supernatural flavour that smirches every scene, but I found myself baffled by the conclusion.

A couple of solid stories follow. “The Legacy” takes us into the Roman catacombs of St. Callixtus in which a mob guy is the focus for a violent apocalypse that I would’ve liked to have seen expanded.

“The Last Supper” introduces a dysfunctional family troubled by copperhead snakes: a relationship piece set around a funeral with a couple of visceral twists.

The final duo ensure the collection ends on a high. I’ve always been partial to macabre tales of the sea, and “Coney Island Green” opens with the intriguing concept of a dead woman who can’t remember who she is, but is spiritually lured by the ocean. A mature, melancholy story, it paves the way nicely for “For You, Faustine”. This is a tale of a sea-serpent-esque creature who braves the perils of New York to avenge her daughter’s death, befriending a young tattooist along the way. It’s a modern folk-tale with a grisly finale and plenty of simple empathy.

While there’s plenty of fascinating history, mythology and geography layered into the tales, I felt that at times the detail cluttered the flow. Some very nicely turned phrases are jolted by infodumps, and there are occasional moments of awkward point-of-view and repetition.

Nevertheless, the book is infused with a strange darkness: the rank poison trickled into your glass of wine. It’s a great title, both as a metaphor for the coldly-served revenge in the tales, and also for what you are being subjected to as reader.

While a more uneven read than Bull Running For Girls, I’ve quite enjoyed the haunting after-images left behind after reading these slightly-askew mood pieces. It’s like having watched a good foreign film. Caught off-guard from the unfamiliarities, but moved by the experience and resolved to visit again.