I’ve been reading more and more e-books recently, lured by the price, immediacy and sheer number of titles available. I particularly like the opportunity to casually download single novelettes or novellas, which during the days of print-only publishing, would’ve been part of a larger and more expensive collection.

One such particular pleasure is “Roots” by Daniel I Russell. In this standalone novelette, we meet Richard, a regular copper frustrated by an increasing number of missing person cases in the neighbourhood. Unbeknownst to him, the murderous culprit lives right across the street, and has been using the butchered corpses to fertilise his garden. But there’s a very hungry and dangerous bit of greenery in that garden, a plant that absorbs the memories of the dead. And it’s growing stronger… 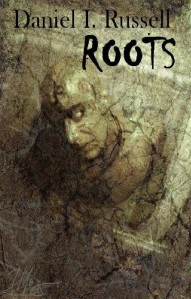 There are no crime procedural elements to this story: this is proud horror and all the better for it. It throws the tropes of serial killers, the undead and monster vegetation together and the results are a crisp and well constructed tale. Roots has the air of a chapter in a television show, like an episode of Masters of Horror or a particularly lurid Tales from the Crypt. The author’s matter-of-fact prose style helps, letting the dialogue and actions speak for themselves and making for an effortless read.

There’s plenty of threat lurking throughout, both subtle and immediate, so even moments of domestic normality seem shadowed and askew. The violence is realistic, and one particular assault from the monster induced an actual writhe. But the author understands there can be as much horror in a footstep echoing down an empty street or a rustle in the trees, and uses such atmosphere and tone to great effect.

My only complaint was an odd situation involving a lift home from a nightclub during which a woman ended up wandering the deserted streets alone. It didn’t quite add up, and felt like she had been shoehorned into jeopardy for the purposes of a scare. But it’s my only complaint, and that scene is still pretty terrifying once it gathers momentum.

Give it a shot. Roots delivers half an hour or so of monstrous fun and is certainly worth the price.