Fans of old-school British horror will fondly remember Amicus studios. Popular in the 60s and 70s, Amicus favoured modern portmanteau anthologies such as Asylum, From Beyond the Grave and Tales from the Crypt, providing an alternative to the saucy period gothic of Hammer. If you’re a fan of these movies, or just enjoy intelligent, wry and entertaining horror fiction, then these two books from Gray Friar Press are certainly for you. 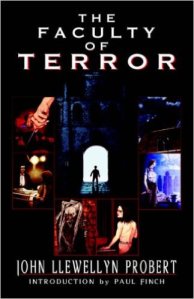 “The Faculty of Terror” and “The Catacombs of Fear” are standalone collections, each bound by a sumptuous framework story. In the former, a young man is invited to dinner at a creepy university building one damp night where storytelling is to be the order of the evening. In the latter, a nervous priest arrives at his new post in a sinister black cathedral, and must learn the shocking experiences of his parishioners.

The tales transport us to a wide array of locales, such as a rain-lashed urban office block, an isolated cottage in the Welsh valleys, and an illegal surgeon’s lair in the back streets of Calcutta. We meet all manner of characters, including a beautiful wheelchair-bound ballerina, a group of murdered asylum seekers, and a ghost in a photo booth. I tried, but couldn’t for the life of me pick a favourite story. Every single one is an expertly-crafted slice of macabre.

The author writes with a crisp, educated prose that moves the tales along at a confident pace towards their final twists. Some of them conclude with dark humour, others with moments of true horror, both poignant and shocking. The twists themselves are in the spirit of the Amicus films, but wonderfully inventive and easily avoid well-trodden horror punchlines. 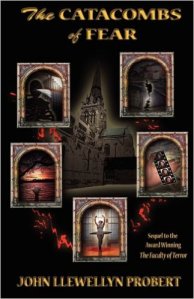 I particularly enjoyed it that music features prominently in several of these stories, be it in the form of composers, musicians or instruments (including the most grisly church organ ever created). As the old Amicus films were beautifully scored, this adds an appropriate element of theatre and also a layer of authenticity to the text.

I can only hope the author pens another installment. John Llewellyn Probert’s imagination is a national treasure, and perfectly suited to this brand of horror. He gets away with lurid and cruel material with his eloquent, delightful tongue – he isn’t afraid to tell a tale right down to the bone – but there are no cheap shots. It’s unusual for such traditional technique and atmosphere to be merged with modern content. It’s even more unusual that it succeeds so mightily.

Complete with genuinely interesting introductions, interviews and story notes, these books are available from the publisher below. Be brave and give your spine a well-deserved tingle. You won’t be disappointed. Just amused, disturbed and very glad that you discovered them.