I hadn’t read any of this author’s work before, so I thought I’d begin with something light-hearted.

The star of this ostentatious title is William Brown, an ordinary bloke who is abducted by an alien from Tau Ceti 42. Although hideous in appearance, the xenomorph goes by the name of John Smith, and turns out to be polite, slightly indignant and affectingly naive with a passion for reruns of the earth show “I Love Lucy”.  The two become friends, and he takes our protagonist on an adventure across the galaxy. 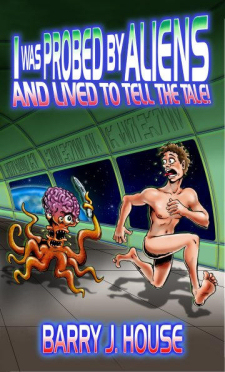 The dialogue is crisp, and there’s plenty of slapstick buffoonery, including the accidental destruction of an entire planet. Even the minor characters bring something to the party. My favourite was a pompous, megalomaniac brain that achieved its glory in a spelling test that lasted thousands of years during which its opponents died of boredom. Neurotic baddies – especially those that are completely unaware of their own absurdity – are always good for laughs.

With its “Which Ray Gun?” magazine and irreverent banter, this is SF very much in the vein of Red Dwarf. The raw science takes a back seat to the gags, and while some of them are pretty obvious, they’re well-timed and relentless.

My only complaint is the language of our narrator. I suspect his slang is used to contrast with the comically well spoken alien, and to inject a distinctly English flavour. Although this worked overall, the overuse of “bloody” seemed unecessary and somewhat intrusive after a while.

But despite this, the pace never lags, and an amusing set of appendices rounds it all off very nicely. Throw in a strong sense of otherworld place, some adept greyscale artwork and a wry smidge of politics, and you’ve got a perfectly entertaining way to spend an hour or so.

I was very sad to learn that Barry passed away at 9 am on Saturday 26th June after a battle with terminal cancer.