I’d been eyeing the gorgeous sugar and blood-coated horror on the cover of this book for several weeks as she waited patiently atop my TBR pile, and I’m pleased to say that she’s worth the wait. 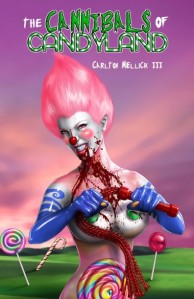 I’ve been a fan of Carlton Mellick III for about six years and while his untamed imagination and textured prose has never been in doubt, I sometimes found the characters in his early work a little samey, and the stories slightly overlong.

I’m very pleased to say that these glitches have been well and truly ironed out.

“The Cannibals of Candyland” features Franklin, a victimised and strangely gentle man who as a child, witnessed his siblings torn apart by a hypnotic, terrible woman made of sweets: one of the candy people. Franklin is obsessed with tracking the killer and her kin, following an internet underground of candy people hunters which gives it all the vibe of an outrageous urban myth. His efforts finally take him into their confectionary lair: “an underground world filled with lollipop forests and gumdrop goblins”.

For this author, the book is less bizarro at the outset – set in a mundane society relatively similar to our own – which I think helps us to identify with the eccentric,  likeable protagonist. He has domestic troubles, hassles with neighbourhood kids. Once his adventure really begins however, the gloves are off and it’s time for some vintage Mellick.

Franklin meets the slayer of his family and her marshmallow dog, and their relationship develops with some fascinating twists. There are touching and tender moments as well as vile shocks, themes of patriarchy and control: this is quality storytelling that doesn’t simply rely on a wild bizarro hook. But neither is the potential for Candyland and its people wasted. A vicious torturer shits ice cream coils of watermelon-grape candy, a sawn-off leg stump is cauterised with hot caramel sauce. If you have a sweet tooth like me, there’s always a danger reading these nightmarish chapters will make you hungry, which is weird on a whole new level. And the sex scene? A brilliant piece of strawberry-pheromone induced writing.

While the book ended a little too abruptly for my taste, it’s otherwise a very strong offering from this master of the genre. If you’re not familiar with Carlton Mellick III, this is a delicious introduction to his work.