“Hawg is one wild ride…” begins Bryan Smith’s blurb on the cover, and if I had to sum up this novel in five words, they’d be what I’d choose.

In the rural community of Miller’s Fork, a feral tusked beast is on the rampage, raping and slaughtering his way across the countryside. 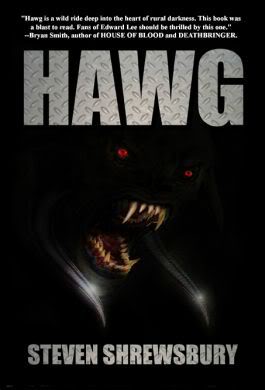 The cast of characters includes a gang of tough bikers, a bewildered police force, some tenacious kids and a farmer who likes his religion dipped in fire and brimstone.

These folks come across as very real, producing some great dialogue and often also a sense of fun. The occasional grin-inducing, theatrical lines of dialogue are self-aware and saved for just the right moment.

But it’s not all smiles.  There’s extreme violence, an impressive body count and one scene in which a pair of kids are trapped and terrorised by the terrifying Hawg had me holding my breath. The gore is in-yer-face, but pleasingly not at the expense of story.

I have a couple of negatives. In the first half of the book, I had to flick back a couple of times to keep up with who was whom. The second gripe was a Hawg chase through a printworks. It was a blast at first –  a joyous slab of carnage –  but went on for just a couple of pages too long and  I was getting bored by the time it finished, which was a shame.

But overall, this book is bang on. There’s some visceral ideas, nods to the genre and a strong sense of place. In fact, the pace and vision of Hawg would translate perfectly into a movie. The film-makers would need a stout cast, a talented director and truckloads of fake blood and offal to do it justice.

You know you want to. Hawg needs to play.